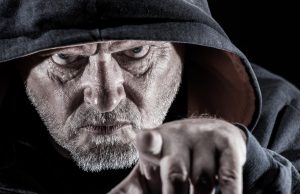 He’s always been there whispering to my subconscious. It’s not a crazy thing. We all have one, that voice you hear in moments of doubt. He can be helpful under the right circumstances, telling you to take the job, kiss the girl, or cross the street when a band of hooligans approach.

The trouble is mine’s a vengeful shylock that stalks me like I’m two weeks late on the self-esteem I never borrowed, never felt. He’s louder when I’m alone. Nights are bad. Traveling’s the worst.

They’re on to you, loser. Any day now, they’ll get wise and then you’re out on your ass. Phony. You can’t possibly think…

It’s endless. He’s always a breath away, muttering things I shouldn’t listen too, shouldn’t believe, but it’s hard to disregard the propaganda. It’s as if my tinnitus was reincarnated as a foul-mouthed, tuxedo-clad Grinch. He’s a charming grifter and I’m a sucker aching for the con.

It’s strange to feel sorry for someone you hate. But I do pity the voice I despise. He beats me down to build himself up. It’s an old trick straight from the bully handbook. But he’s not real…not really. I knew that from the beginning. As a kid he tried to convince me that I’d never amount to much, never escape the thing we don’t talk about anymore. He succeeded for a long time.

They say the Great Wall sparks self-reflection. Those who haven’t been just think of the Grand Canyon with subtitles. Standing on something so old, so massive gives you perspective and I realized on that sun-drenched afternoon that my Narrator was full of shit.

I doubt I’ll ever shake him completely, but these days when he speaks I smile instead of cower. His voice is finally fading and mine is just beginning to rise.